Hinchliffe is one of the last surviving stadiums that hosted Negro League games. Can it be saved? 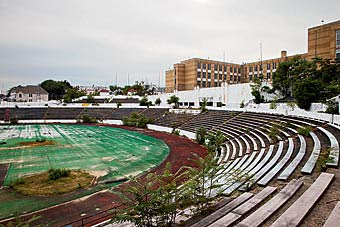 Monte Irvin stepped into the batter's box at Hinchliffe Stadium in Paterson, N.J., took measure of the stately new ballpark, and began depositing baseball after baseball over the outfield wall, some of his prodigious blasts traveling more than 400 feet.

It was the spring of 1937, and Irvin, a 17-year-old rising star from the nearby city of Orange with a .666 high school batting average, was at Hinchliffe trying out for a professional baseball team. Because Irvin was African American, and because of the color barrier in the major leagues, the team was not the New York Yankees or the Brooklyn Dodgers but a Negro League ball club called the Newark Eagles.

The sweet sound of home run after home run—crack, crack, crack—attracted the attention of Josh Gibson and Buck Leonard, two Negro League players preparing for a game at Hinchliffe later that day. Irvin was introduced to the two stars, whose grace, athleticism, and dapper uniforms and dress had inspired him. Indeed, Gibson had been called The Black Babe Ruth and Leonard The Black Lou Gehrig (though some wondered if Gehrig should have been dubbed The White Buck Leonard). And on this day, Irvin learned he would play alongside his two idols. He had made the Eagles.

Even though Irvin never imagined it possible at the time, with his paltry $125-a-month salary and the seemingly unshakeable reality of segregation in America, he would become one of the first African American players to make the major leagues after Jackie Robinson broke the color barrier in 1947, and would go on to enjoy a Hall of Fame career as a left fielder for the New York Giants and Chicago Cubs.

The courage that players such as Irvin and Robinson mustered in the face of hostile crowds in the majors had a profound impact on African Americans everywhere, their performance and character a rebuke to the notion that race somehow rendered them inferior. It was in the Negro Leagues —where conditions were often second-rate but the play was anything but—that their long journey began. More: http://www.preservationnation.org/magazine/story-of-the-week/2009/negro-league-stadium.html 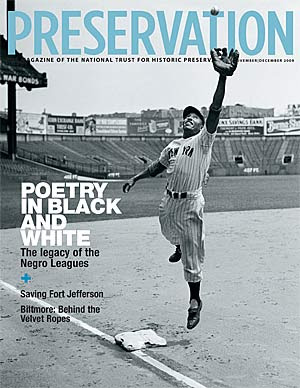 Price: Free to the public

The Tampa-Hillsborough County Public Library System is pleased to announce it has been awarded the opportunity to host Pride and Passion: The African-American Baseball Experience at the John F. Germany Library, from Jan 4, 2010 through Feb 19, 2010 and to receive $2500 grant funds from the National Endowment for the Humanities. The traveling exhibition is based on an exhibition of the same name on permanent display at the National Baseball Hall of Fame and Museum and tells the story of black baseball players in the U.S. over the past century and a half. In addition to the exhibit, the John F. Germany Library will be presenting an Opening Day Ceremony on Saturday, Jan. 16 at 2 p.m. with the Tampa Bay Rays, acclaimed illustrator Kadir Nelson, Jackie Robinson’s daughter Sharon Robinson and Negro League scholars Dr. Lawrence Hogan and Dr. Robert Cvornyek. Many other programs that are inspired by the exhibit will also be offered during its run, including appearances by former players, scholarly panel discussions, baseball-themed craft programs for children, and much more!

This is a real awe-inspiring information. One cannot really imagine the plight of the African- American players especially those who were very talented and wanted to make it big. They had to struggle a lot. But now things have changed mightily and hopefully now the players do not have to suffer humiliation just coz of the color of their skin.